To meet the U.S. national climate goal of cutting emissions 50% by 2030 compared to 2005 levels, as well as the Biden administration’s 2050 net-zero emissions goal, the U.S. will need to scale a range of new clean energy technologies. While proven technologies such as renewable generation and energy efficiency can drive a significant share of the greenhouse gas emission reductions necessary to achieve the U.S. climate target, new technologies are needed to address the remaining hard-to-decarbonize sectors that are important drivers of economic growth in the U.S., such as industry and heavy-duty transportation. Promoting U.S. innovation and competitiveness will require incentives to scale these emerging technologies.

One such emerging technology is green hydrogen, which is well-placed to help the U.S. address a range of hard-to-decarbonize sectors. Green hydrogen is made by using zero-emissions electricity to run an electrolyzer, which splits water into hydrogen and oxygen while producing no greenhouse gas emissions. Hydrogen is a versatile fuel that can be used in a wide variety of applications, including industrial processes, as a transportation fuel or as energy storage for the power grid.

Although existing federal and state policies support a variety of other clean energy technologies, there is currently no quantified federal incentive specifically for green hydrogen. Green hydrogen technology has reached a level of technological maturity where federal tax incentives will be effective at driving deployment, creating jobs and generating economic growth. Tax credits have been a cornerstone of federal policy for rapidly scaling solar and wind technologies; the solar power investment tax credit and wind power production tax credit have created a $55 billion domestic solar and wind power market, produced 0.4 million jobs and account for over 10% of power generation.1 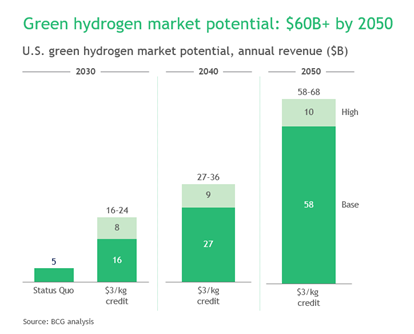 A recent study suggests that a $3/kgH2 production tax credit could create approximately 1-2 million good-paying domestic jobs. By 2050, the green hydrogen market could expand to approximately $60-70 billion annual market and trigger a cumulative $1.5-2.0 trillion of capital investment. Jobs in the green hydrogen industry will have an estimated median salary of about $55,000.2 Jobs would be created across the green hydrogen value chain, including in equipment manufacturing, project construction and facility operations. 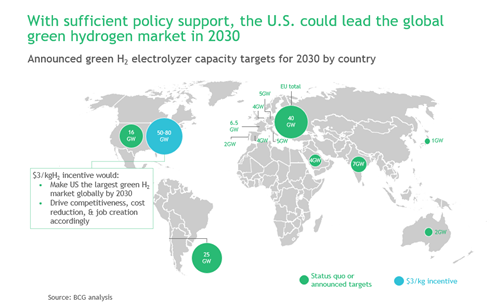 Green hydrogen is needed for deep decarbonization in hard-to-abate sectors across industry, transportation, power and buildings. For example, green hydrogen can be used in the industrial sector to decarbonize fertilizer production and reduce agricultural emissions. In the transportation sector, green hydrogen can be used as a long-haul trucking fuel. Currently, decarbonizing many of these sectors is either technically challenging or is cost-prohibitive absent policy incentives.

The many end-uses for hydrogen make it a leading pathway
to a zero-carbon future across many parts of the U.S. economy

2 Roger Bezdek “The hydrogen economy and jobs of the future” Renewable Energy and Environmental Sustainability, January 8, 2019.